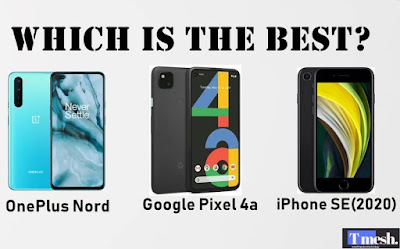 Recently OnePlus released its OnePlus Nord, which is giving excellent quality and performance according to the price.  It is powerful on-paper as well as its performance in real life is also tremendous. Google has also launched its Pixel 4a, which is also economical and has lace with powerful features.

So where is Apple going to lag, Apple brings its Special Edition every year at a low price, for those who cannot buy Apple’s flagship phone, but fan’s of Apple phones and wants to use it.  Everyone knows that no one can compete with Apple’s camera and display quality in the market, and Apple continues to bring offers in e-Commerce site to sell more of the iPhone SE, which can give fierce competition to  Pixel 4a and one plus Nord in the budget range of 30-45K.

So let’s compare these three smartphones and find the result which is best among these.

OnePlus Nord launched in July, with a starting price of Rs 24,999, which is for 6 GB RAM and 64 GB variant.  However, this model will be available for sale in the country from next month.  OnePlus Nord’s 8 GB RAM + 128 GB storage variants and 12 GB RAM + 256 GB storage variants are priced at Rs 27,999 and Rs 29,999 respectively.  Both these variants are available for country purchases.  Nord comes with Blue Marble and Gray Onex color options.

On the other hand, the Google Pixel 4a was launched earlier this month in the US for $ 349 (about Rs 26,100), which offers 6 GB of RAM and 128 GB of storage.  It will also be available in India in October, and the price will also announce around the sale date.  Pixel 4a comes in Jet Black color.

OnePlus Nord vs. Google Pixel 4a vs. iPhone SE (2020): Specifications

In terms cameras, the setup of four cameras is available behind the OnePlus Nord, while the other two phones get one camera each.

Read this: Zenfone 7 launch on August 26, see the details here

Now you must know which phone is better for you, and which one you will buy. We have given you the whole fact, according to which you have known the merits and shortcomings of all the phones and if there is still any confusion, then you can ask us by commenting on the comment section.
Stay connected with us to read such informative posts and follow us on Facebook, Twitter, and Instagram.